Not just a Bmesh update, but that is the coolest part!

Here comes Blender 2.63, chock full of all sorts of fun new features, and more specifically: The mesh editing system has been upgraded to Bmesh! On the splash of course, we can see evidence of the mango team already at work (as well as in a some release notes), and even a couple fixes and features for the video sequencer, which I hope is just a taste of what is to come. Almost fifty developers, some submitting patches to bugs, new features, and some commiting like crazy (think Campbell Barton with more than 700 commits!) have put this build together. In the next few hours 2.63 will show up for downloading. So what's next?

Read More >>
Posted by Jonathan at 2:57 PM 1 comments. Share something!

You might be wondering where the Blender 2.63 release has been hanging out. Well behind the scenes of the start of the new Blender Foundation Open Movie (Mango), the developers have been working hard on getting the next release of Blender prepped. The development process is in the BCon3 stage right now, which means that bugs are being fixed and the release is getting stabilized. No new features are being added at this point, since all the big ones have already been merged. Here are the features that have made it in.

Read More >>
Posted by Jonathan at 5:41 PM 0 comments. Share something!

Not only has Blender 2.60 come out in the last couple weeks, but also a bugfix 'a' release, which brings the latest version of Blender up to 2.60a (Which you can download here, if you haven't already...)! This release brought us 3D audio, video sequencing improvements, vertex weight groups, navigation meshes (for the game engine), even greater improvements to the animation system and better support for other languages. You can see the full release log here if you want.

Now it's the Blender developers are gearing up for their 2.61 release, which should occur sometime in December. This release is set to bring a number of very large improvements!

Read More >>
Posted by Jonathan at 2:02 AM 1 comments. Share something!

The Future of the GIMP

GIMP 2.7.3, the latest development release of GIMP was released a week ago, continuing to impress those who have been using it for a while. 2.7.3 introduced a fully working single-window mode, as well as working session management, and a new scale widget which takes less space in the dockable dialogs. Those were very visible changes in 2.7.3, however that short list, doesn't go anywhere near doing justice to the large amount of work that was put into this latest development release. For the whole list of changes since 2.7.2 you can read here. If you want to read about all the changes in the 2.7.x series you can read in the 2.7 release notes.

Along with this latest development release, you can check out the GIMP Roadmap, which shows some (but definitely not all) of the major targets for future versions of GIMP. 2.8 will, in itself, be a major milestone for the GIMP, however, what really excites me is the other milestones on the Roadmap page. Many of the changes are critical if GIMP is to start gaining a larger audience, specifically if it is to try to grab designers from  Photoshop. These changes include the major targets for 2.8, gaining single-window mode and layer groups, as well as many of the targets for later versions, such as 3.6 - smart objects, and 3.8 - a unified transform tool.

GIMP development is looking forward to exciting changes. Mentioned on the GIMP website was the fact that GIMP is also shortening it's development cycle (like a lot of other major programs these days!), starting with trying to release 2.8 in the end of 2011 (probably around December).

With all these changes, and more attention being focused on GIMP, many people are starting to wonder about first impressions. A well known designer has contacted the development team to ask about designing a new icon. Although no one with authority responded to him, he raises a good point. Is the icon getting old? An Ubuntu blog, and a web designer both mentioned GIMP's name, wondering if it might be time to change it, in order to better attract people to the program. You can head over to the Ubuntu blog to vote on a poll about the matter.

Keep checking up on the GIMP as it undergoes these dramatic changes.

The Journey of Blender 2.6 has Just Begun...

Blender 2.59, the final release in the 2.5x series, has been put up on the Blender website. There was some last minute hassles that popped up behind the scenes as you might have seen if you subscribe to bf-commiters, the development mailing list. This was mostly due to the fact that a number of Blender developers were away at the SIGGRAPH conference. However despite this inconvenience and a number of last minute bugs that were found, Campbell Barton and the rest of the crew made it through and release version 2.59, definitely the best version of Blender yet!

Now the focus turns to Blender 2.6x, starting with 2.60, where many branches which have not been combined with Blender will be. The official list of branches about to be merged is on the Blender Wiki here, however I'm sure that those won't be the only goodies added to Blender 2.6. On Blenderartists there is already mention of all of Nicholas Bishops work, which hasn't been listed on the Blender Wiki. Besides that there is also the 8 branches from GSOC this year. Need I even mention the fact the Bmesh will (hopefully) finally be integrated!

Exciting times ahead for Blender.
Posted by Jonathan at 10:32 PM 1 comments. Share something! 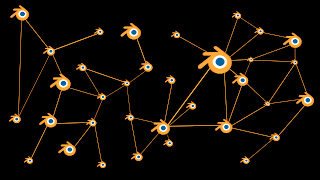 Announced in this week's Blender Developer's Meeting notes, is a new idea for a Blender support network.
The proposal (which can be found using the link above), is a great idea for connecting professional Blender artists and customers. It is an easy way to provide support to studios as well as individuals.
To use the network you will have to sign up as a member. The membership fees will help cover the costs of the web hosting/maintenance and moderators. There are three different membership types planned:
There will be various ways of "networking" with fellow artists and corporations. And each member will have a private page which can be updated with jobs he/she has done, and other information.

If the proposal goes through the BF has already asked Lumikuu to help set up the network and then maintain it for the first couple of months.
You can find the discussion thread on blender.org here.
We'll see how far this goes in the coming months, but this could be the new big thing for Blender.
Posted by Jonathan at 2:02 AM 0 comments. Share something!